The Jackson Covered Bridge, also known as the Rockport Covered Bridge, crosses Sugar Creek just northwest of Bloomingdale on County Road North 50 West in Parke County. This single span Double Burr Arch Truss structure (double meaning that there are two arches, one atop the other on each side) is the longest single span covered bridge in Indiana (also the longest single span in the United States open to daily use) having a length of 207 feet, or 225 feet including the 9-foot overhang at each end, with portals that are 16 feet wide by 18 feet high; the unusual height is proportional to the unusual length of the bridge as the arches actually have to peak high up in the crown. Built in 1861 by Joseph J. Daniels, who dedicated the structure to Andrew Jackson, this was his was Daniels first covered bridge built on a roadway he had previously constructed railroad covered bridges. Though no historical marker is present, the Jackson Covered Bridge was listed on the National Register of Historic Places in 1978 and is listed in the 1989 “World Guide to Covered Bridges,” published by The National Society for the Preservation of Covered Bridges, Inc., as #14-61-28; Parke County officials use the same designation.”

The rehabilitation of the Jackson Bridge required CLR to move the bridge off of its abutments and temporarily cribbed up in the middle of the county road just to the North of its permanent location, so the repairs could be made.  This was required to insure that the bridge would not ‘wash away’ during the period of construction that would require the bridge to be supported with cribbing for replacement of the upper and lower chords, as well as the diagonals and verticals.

The Jackson Bridge had a bow in it that was caused by wind.  History tells that there was a tornado nearby several years ago that took the roof of the Jackson Bridge, and but a very noticeable bow in the bridge.  This bow could be seen as you entered the bridge, with most of the bow in the northern half of the bridge.  Several years ago the bridge was straightened as much as possible by pulling the bridge from nearby trees, and then lag screwing the floor system together.  After this straightening was completed the bridge still had about a twelve to eighteen inch bow.  A big part of the rehabilitation was to completely straighten the bridge, and this was accomplished by having the bridge off of its abutments and sitting in the middle of the road.

CLR Inc. encountered many conditions while the Jackson Bridge was under construction.  A temporary bridge had to be constructed under the existing covered bridge, to support the Jackson Bridge while it was being moved.  This was done during the winter of ’05-’06, the weather turned extremely cold while constructing this ‘temporary’ bridge, with temps dipping well below zero for weeks at a time.  The move was scheduled to take place at a time when the temps were at its coldest, so the actual move had to be delayed a week.  The cold temps would not allow the hydraulic jacks that were to be used to work properly.  When the move day did finally arrive, it was a beautiful clear day, and everything went perfectly as planned.   The actual time that it took to move the bridge from its original location to a location 200 feet to the north was about 4 hours.  When it was moved back to its original position it only took about 2 hours.  But the ‘temporary’ bridge had to be rebuilt because of a flood that occurred during the past winter.  Along with the high water came low temps and then, foot thick ice that washed many of the steel beams and concrete barriers that the ‘temporary’ bridge was constructed of.

At one point near the end of the project, the bridge resembled an old fashioned barn raising, with as many as 30 laborers and carpenters working at the same time.  Some of the original stones on the North abutment had to be removed to facilitate the moving of the bridge, after the bridge was reset on its abutments, some of the original stones were re-set, but the ones that were under the chords were replaced with steel beam cribbing and then encased with steel reinforced concrete.  This steel reinforced concrete was formed with a plastic form liner, which gave the new concrete the look of hand laid stone, and colored with concrete coloring to match the original stones. 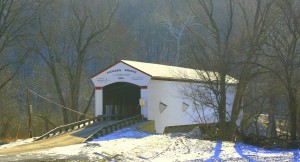