This Whipple through truss bridge is located in Aurora Indiana on George Street, right downtown and on the banks of the Ohio River, crossing Hogan Creek.  We made repairs to some of the diagonals as well as some of the vertical posts.  Also included in the project was removal and replacement of the sidewalk that is located along outside of the truss.  Since this bridge is located within the city limits, it is a very well traveled sidewalk.  The existing sidewalk did not meet newer ADA requirements, which what necessitated the need for the new sidewalk.  Before, only one wheelchair at a time could cross the bridge, but now with the new wider walkway, two can meet each other rather than waiting at the end of the bridge for one to pass.

After the repairs were completed, the entire structure was painted with a specially formulated paint system that encapsulates the individual steel members to prevent moisture from collecting between steel members, to give a longer life to the historic structure.

Below, see a news clipping from the Aurora Indiana area on, September 23, 2011:

(Aurora, Ind.) – While President Barack Obama was speaking about his jobs plan to help replace the Brent Spence Bridge linking Cincinnati, Ohio to Covington, Kentucky Thursday, a smaller bridge in Aurora was being reopened.

The bridge over Hogan Creek had closed for a repair and renovation project this past Spring, leaving drivers on U.S. 50 only two other access points to downtown Aurora – either First Street or Exporting Street.

The bridge has undergone its final inspection from the Indiana Department of Transportation.

The George Street Bridge is a metal pinned whipple through truss originally constructed in 1887. Its last rehabilitation had occurred in 1989. 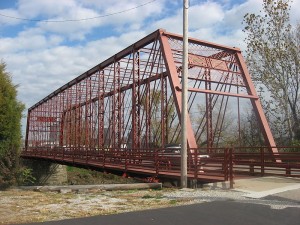